Finno-Ugric, Finno-Ugrian or Fenno-Ugric is a traditional group of languages in the Uralic language family that comprises the Finno-Permic and Ugric language families. The three most spoken members are Hungarian, Finnish, and Estonian.
Linguistic roots common to both branches of the traditional Finno-Ugric language tree (Finno-Permic and Ugric) are extremely distant. About two hundred words with common roots in all main Finno-Ugric languages have been identified by philologists including fifty-five about fishing, fifteen about reindeer, and three about commerce.
The term Finno-Ugric, which originally referred to the entire family, is sometimes used as a synonym for the more recent term Uralic, which includes the Samoyedic languages, as commonly happens when a language family is expanded with further discoveries.
Attempts at reconstructing a Proto-Finno-Ugric protolanguage—that is, a common ancestor of all Uralic languages except for the Samoyedic languages—are largely indistinguishable from Proto-Uralic, suggesting that Finno-Ugric may not be a historical grouping but a geographical one, with Samoyedic being distinct due to lexical borrowing rather than actually being historically divergent. It has been suggested that the area where Proto-Finno-Ugric was spoken reached between the Baltic Sea and the Ural mountains.
Traditionally, the main set of evidence for the genetic proposal of Proto-Finno-Ugric has come from vocabulary. A large amount of vocabulary (e.g., the numerals “one”, “three”, “four” and “six”; the body-part terms “hand”, “head”) is only reconstructed up to the level of Proto-Finno-Ugric level, while only words with a Samoyedic equivalent have been reconstructed for Proto-Uralic. This methodology has been criticised, as no coherent explanation other than inheritance has been presented for the origin of most of the Finno-Ugric vocabulary (though it does include a number of old loanwords from Proto-Indo-European or its immediate successors). The Samoyedic group has undergone a longer period of independent development, and its divergent vocabulary could be due to mechanisms of replacement such as language contact. (The Finno-Ugric group is usually dated to approximately 4000 years of age, the Samoyedic a little over 2000.) Proponents of the traditional binary division note, however, that the invocation of extensive contact influence on vocabulary is at odds with the grammatical conservatism of Samoyedic.
The relation of the Finno-Permic and the Ugric groups is adjudged remote by some scholars. On the other hand, with a projected time depth of only 3 or 4 thousand years, the traditionally accepted Finno-Ugric grouping would be far younger than many major families such as Indo-European or Semitic, and would be about the same age as, for instance, the Eastern subfamily of Nilotic. But the grouping is far from transparent or securely established. The absence of early records is a major obstacle. As for the Finno-Ugric Urheimat, most of what has been said about it is speculation.
The Pit–Comb Ware culture AKA Comb Ceramic culture was a northeast European culture of pottery-making hunter-gatherers. It existed from around 4200 BC to around 2000 BC. The name is derived from the most common type of decoration on its ceramics, which looks like the imprints of a comb.
The distribution of the artifacts found includes Finnmark (Norway) in the north, the Kalix River (Sweden) and the Gulf of Bothnia (Finland) in the west and the Vistula River (Poland) in the south. In the east the Comb Ceramic pottery of northern Eurasia extends beyond the Ural mountains to the Baraba steppe adjacent to the Altai-Sayan mountain range, merging with a continuum of similar ceramic styles. It would include the Narva culture of Estonia and the Sperrings culture in Finland, among others. They are thought to have been essentially hunter-gatherers, though e.g. the Narva culture in Estonia shows some evidence of agriculture. Some of this region was absorbed by the later Corded Ware horizon.
The Pit–Comb Ware culture is one of the few exceptions to the rule that pottery and farming coexist in Europe. In the Near East farming appeared before pottery, then when farming spread into Europe from the Near East, pottery-making came with it. However in Asia, where the oldest pottery has been found, pottery was made long before farming. It appears that the Comb Ceramic Culture reflects influences from Siberia and distant China.
It is hypothesized that the Comb Ware people may have spoken Paleo-European (pre-Finno-Ugric) or an early Uralic language. However some toponyms and hydronyms may indicate also a non-Uralic, non-Indo-European language at work in some areas.

The Budini (Greek: Boudinoi) were an ancient people who lived in Scythia, in what is today Ukraine. In his account of Scythia (Inquiries book 4), Herodotus writes that the Geloni were formerly Greeks, having settled away from the coastal emporia among the Budini, where they “use a tongue partly Scythian and partly Greek”:
“The Budini for their part, being a large and numerous nation, is all mightily blue-eyed and ruddy. And a city among them has been built, a wooden city, and the name of the city is Gelonus.
Of its wall then in size each side is of thirty stades and high and all wooden. And their homes are wooden and their shrines. For indeed there is in the very place Greek gods’ shrines adorned in the Greek way with statues, altars and wooden shrines and for triennial Dionysus festivals in honour of Dionysus.”
“Above the Sauromatae (Sarmatians), possessing the second region, dwell the Budini, whose territory is thickly wooded with trees of every kind. The Budini are a large and powerful nation: they have all deep blue eyes, and bright red hair.
The Budini, however, do not speak the same language as the Geloni, nor is their mode of life the same. They are the aboriginal people of the country, and are nomads; unlike any of the neighbouring races, they eat lice.
Their country is thickly planted with trees of all manner of kinds. In the very woodiest part is a broad deep lake, surrounded by marshy ground with reeds growing on it. Here otters are caught, and beavers, with another sort of animal which has a square face.
With the skins of this last the natives border their capotes: and they also get from them a remedy, which is of virtue in diseases of the womb… Beyond the Budini, as one goes northward, first there is a desert, seven days’ journey across…”
The fortified settlement of Gelonus was reached by the Persian army of Darius in his assault on Scythia during the 5th century BC, already burned to the ground, the Budini having abandoned it before the Persian advance.
The Scythians sent a message to Darius: “We are free as wind and what you can catch in our land is only the wind”. By employing a scorched earth strategy, they avoided battles, leaving “earth without grass” by burning the steppe in front of the advancing Persians (Herodotus). The Persian army returned without a single battle or any significant success.
Later located eastward probably on the middle course of the Volga about Samara, the Budini are described as fair-eyed and red-haired, and lived by hunting in the dense forests. In their country was a wooden city called Gelonos, inhabited with a “distinct race”, the Geloni, who according to Herodotus were Greeks that became assimilated to the Scythians. Later writers add nothing to our knowledge of the Budini, and are more interested in the tarandus, an animal that dwelt in the woods of the Budini, possibly the reindeer (Aristotle ap. Aelian, Hist. Anim. xv. 33).
Red hair is the rarest natural hair color in humans. The non-tanning skin associated with red hair may have been advantageous in far-northern climates where sunlight is scarce. Studies by Bodmer and Cavalli-Sforza (1976) hypothesized that lighter skin pigmentation prevents rickets in colder climates by encouraging higher levels of Vitamin D production and also allows the individual to retain heat better than someone with darker skin.
In 2000, Harding et al. concluded that red hair was not the result of positive selection and instead proposed that it occurs because of a lack of negative selection. In Africa, for example, red hair is selected against because high levels of sun would be harmful to untanned skin. However, in Northern Europe this does not happen, so redheads come about through genetic drift.
According to some researchers, the Budinis were a Finnic tribe ruled by the Scythians. The 1911 Britannica surmises that they were Fenno-Ugric, of the branch now represented by the Udmurts and Komis (this branch is now called “Permic”), forced northwards by later immigrants. Edgar V. Saks identifies Budini as Votic people, a people of Votia in Ingria, the part of modern-day northwestern Russia that is roughly southwest of Saint Petersburg and east of the Estonian border-town of Narva.

The Udmurts are a people who speak the Udmurt language. Through history they have been known in Russian as Chud Otyatskaya, Otyaks, or Votyaks (most known name), and in Tatar as Ar. The Udmurt language belongs to the Uralic family.
The name Udmurt probably comes from *odo-mort ‘meadow people,’ where the first part represents the Permic root *od(o) ‘meadow, glade, turf, greenery’ (related to Finnish itää ‘to germinate, sprout’) and the second part (Udmurt murt ‘person’; cf. Komi mort, Mari mari) is an early borrowing from Indo-Iranian *mertā or *martiya ‘person, man’ (cf. Urdu/Persian mard). This is supported by a document dated Feb. 25, 1557, in which alongside the traditional Russian name otyaki the Udmurts are referred to as lugovye lyudi ‘meadow people’.
On the other hand, in the Russian tradition, the name ‘meadow people’ refers to the inhabitants of the left bank of river general. Recently, the most relevant is the version of V. V. Napolskikh and S. K. Belykh. They suppose that ethnonym was borrowed from the Iranian entirely: *anta-marta ‘resident of outskirts, border zone’ (cf. Antes) → Proto-Permic *odə-mort → Udmurt udmurt.
Anthropologists relate Udmurts to the Urals branch of Europeans. Most of them are of the middle size, often have blue or gray eyes, high cheek-bones and wide face. The Udmurt people are not of an athletic build but they are very hardy. and there have been claims that they are the “most red-headed” people in the world. Additionally, the ancient Budini tribe, which is speculated to be an ancestor of the modern Udmurts, were described by Herodotus as being predominantly red-headed.
Most Udmurt people live in Udmurtia. Small groups live in the neighboring areas: Kirov Oblast and Perm Krai of Russia, Bashkortostan, Tatarstan, and Mari El. The Udmurt population is shrinking; the Russian census reported 637,000 of them in 2002, compared to 746,562 in 1989. 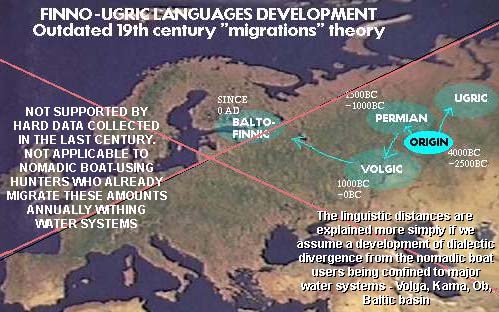 An approximative map of the non-Varangian cultures in European Russia, in the 9th century.