Cappadocia is a magical and breathtaking region with its unique mix of natural geography, Anatolian history and vibrant traditional Turkish culture. The rocky fairy chimneys attest to ancient volcanic eruptions and the ravages of sun, frost, wind, and rain. Cappadocia’s history embodies the consequences of its unique Central Anatolian situation which offered both protection from and vulnerability to the various armies that swept across the region. More importantly, Cappadocia’s living culture encapsulates a tolerance of religious and cultural differences which is deeply rooted in a past where Muslims, Christians and Jews lived alongside each other in harmony for centuries.

Cappadocia is famous for its traditional way of life. Local women in the street still wear their traditional baggy trousers and decorative headscarves. In the countryside you may notice fields being ploughed by horses or even donkeys, and mules, donkeys and carts take the produce home. In local villages, the women bake bread in the communal oven at least once a week.

The lunar landscape of Cappadocia is dotted with fairy chimneys, rock castles, underground cities, and cave dwellings – some of which are still lived in today. You too can stay in a cave, as many of the hotels are traditional dwellings that have been luxuriously restored.

Cappadocia has been inhabited since prehistoric times. No one knows when the underground cities were dug out – some say it was the Hittites who began the process. In more recent times, the valleys became home to Orthodox Christian monasteries, and their beautifully decorated churches are one of the regions main attractions.

Wild flowers and plants are abundant, and the small fields of the local people are full of fruit trees, nut trees, and vines. Some local people collect the herbal plants to make their own medicinal teas. Birds, butterflies, gofer-type creatures, and foxes are common everywhere. The most common large bird in Cappadocia is the long-legged buzzard, whose long legs allow it to swoop and catch prey from the ground without landing.

There are many local restaurants with wonderful varieties of traditional Turkish cuisine. Look out for the local home-made ravioli called ‘manti’ served with yoghurt and home-made tomato sauce. You just have to try Turkish pizza, called ‘pide’, which is made from a long piece of very thin bread. Sweets include rice pudding served cold, often sprinkled with cinnamon, and asure (a-shore-ray), the oldest dessert in the world invented by Noah when his Ark came to land – it contains dried fruit, nuts, cereals and pulses. 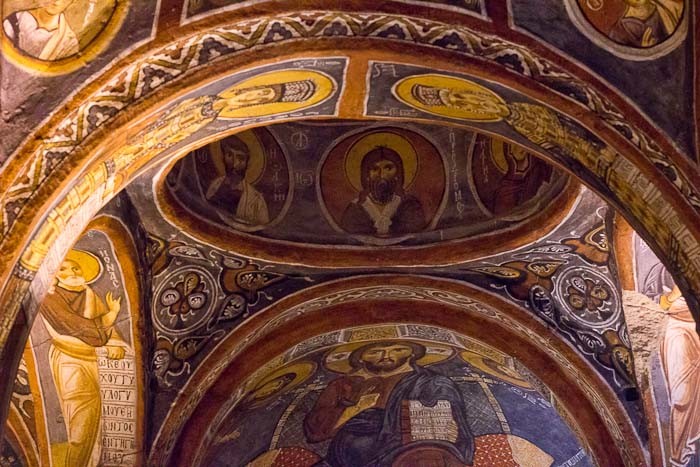