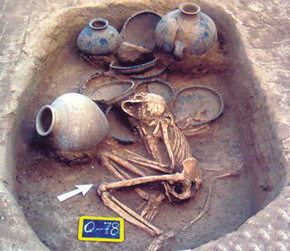 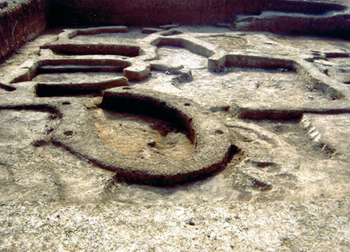 “The work unearthed the remains of hundreds of tombs and ancient settlements from the end of the Copper Age (Chalcolithic or Eneolithic Age, the first half of the 4th millennium BC) right up to the Middle Ages inclusive. These sites were found mainly in Western Azerbaijan, along the middle reaches of the Kur River. From ancient times the favourable geography of the region attracted tribes engaged in agriculture and cattle-breeding.
These finds are evidence of the high development of crafts such as pottery, bone working, stone working, metal working and weaving of the settled agricultural and cattle-breeding tribes. The Soyugbulag barrows, the first barrows of the Copper Age in the whole South Caucasus, are especially important remains of the Leylatepe culture.
Apart from Khojakhan, all the aforementioned Copper Age sites concern the Leylatepe archaeological culture or people. The Leylatepe people emerged in the first half of the 4th millennium BC as the result of the migration of the Ubaid tribes from Mesopotamia to the South Caucasus, especially Azerbaijan. The Leylatepe people were named after the site of the same name in Agdam District which was excavated in the 1980s.
After inhabiting the Northern Caucasus in the second half of the 4th millennium BC, the Leylatepe people became part of the Maykop people. Therefore, the research into the remains of the Leylatepe culture is of great importance in the study of the cultural, economic and ethnic links of the Caucasus and the Middle East.

Some of the barrows discovered and excavated along the pipeline route belong to the Kura-Araxes culture of the early Bronze Age. These barrows date to the final period of this culture, i.e. the third quarter of the 3rd millennium BC.”
Baku-Tbilisi-Ceyhan Pipeline Boosts Azerbaijani Archaeology 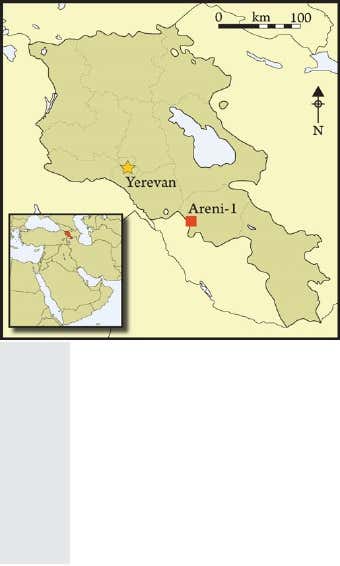 The archaeological exploration of a cave inthe southern Caucasus revealed evidence for early social complexity, ritual burial and wine-making in the early fourth millennium.The marvellous preservation of wood, leather and plants offers a valuable contrast to the  poorer assemblages on contemporary tell sites.The authors make the case that the Areni-1cave complex indicates connections betweenthe urbanisation of early Mesopotamia and the Maikop culture of south Russia.
“The discovery of the pre-Maikop and Early Maikop component at Areni-1 supports arecent hypothesis that early Maikop assemblages, including the two famous burial mounds of Maikop and Staromyshastovskij, must be dated no later than the middle or the second half of the fourth millennium BC (Lyonnet2000,2007; Ivanova2007).
Such a deepening of the Maikop chronology has groundbreaking implications for the archaeology of Mesopotamia.Since the ﬁrst stage of the Early Bronze Age Maikop culture must be considered as acontemporary to the Late Chalcolithic Uruk, the artistic metalwork from Maikop may actually represent imports from Uruk or, at least, echoes its products. If conﬁrmed, this would suggest that the Uruk trade networks extended far beyond the limits previously perceived, reaching such distant regions as south-eastern Europe.”

The chalcolithic of the Near East andsouth-eastern Europe: discoveries andnew perspectives from the cave complex  Areni-1, Armenia

[youtube=http://www.youtube.com/watch?v=nQZFS9Hij0M]
[youtube=http://www.youtube.com/watch?v=nQZFS9Hij0M]
–
Dwarka (Listen) also spelled Dvarka, Dwaraka, and Dvaraka, is a city and a municipality of Jamnagar district in the Gujarat state in India. Dwarka (Dvaraka in Sanskrit – used in this article when referring to the city in a historical context), also known as Dwarawati in Sanskrit literature is rated as one of the seven most ancient cities in the country. The legendary city of Dvaraka was the dwelling place of Lord Krishna. The city is one of seven most holy places for Hindus in India where Varanasi is considered as the holiest of the seven holy cities.
The Gulf of Khambhat (formerly known as the Gulf of Cambay) is an inlet of the Arabian Sea along the west coast of India, in the state of Gujarat. It is about 80 miles in length, and divides the Kathiawar peninsula to the west from the eastern part of Gujarat state on the east. The Narmada and Tapti rivers empty into the Gulf.
Marine archeology in the Gulf of Khambhat centers around controversial findings made in December 2000 by the National Institute of Ocean Technology (NIOT).
The structures and artifacts discovered by NIOT are the subject of contention. The major disputes surrounding the Gulf of Khambhat Cultural Complex (GKCC) are claims about the existence of submerged city-like structures, the difficulty associating dated artifacts with the site itself, and disputes about whether stone artifacts recovered at the site are actually geofacts or artifacts.
One major complaint is that artifacts at the site were recovered by dredging, instead of being recovered during a controlled archeological excavation. This leads archeologists to claim that these artifacts cannot be definitively tied to the site. Because of this problem, prominent archeologists reject a piece of wood that was recovered by dredging and dated to 7500 BC as having any significance in dating the site.
Hindu legend harkons back to a time when gods mingled with the peoples of ancient India, and the great city of Dwarka was once the fabled home and capital of the noted Vedic hero and god, Sri Krishna. Its luxurious and opulent walls were known to “cast a golden reflection” upon the surrounding waters of the Gujurat peninsula off the shore of northwestern India, and some believe, to have been the natural harbor city for the now dried up ancient river system of the Sarasvati described in detail within the Rig Veda. It is believed that perhaps Dwarka has submerged at least six times in its long history and the now modern day Dwarka is therefore the seventh such city to be built in the area with that name.
One of the main controversies surrounding the GKCC is the dated piece of wood. Dr. D.P. Agrawal, chairman of the Paleoclimate Group and founder of Carbon-14 testing facilities in India stated in an article in Frontline Magazine that the piece was dated twice, at separate laboratories. The NGRI in Hyderabad returned a date of 7190 BC and the BSIP in Hannover returned a date of 7545-7490 BC. Some archeologists, Agrawal in particular, contest that the discovery of an ancient piece of wood does not imply the discovery of an ancient civilization. Agrawal argues that the wood piece is a common find, given that 20,000 years ago the Arabian Sea was 100 meters lower than its current level, and that the gradual sea level rise submerged entire forests.
Another issue is the potsherds retrieved from the site during the various excavations. Researchers describe them as indicative of hand-made and wheel-turned pottery traditions. The remains found have simple rims with small incised lines. All of the remains found so far belong to small or miniature pieces of pottery.
Part of the controversy is that these pieces might be natural geofacts; the small size of the artifact collection makes it difficult to conclusively analyze the pottery. But if the pottery is genuine, researchers say it should show some similarities to Harappan pottery, which is typically red and black and stamped with seals. Based on the current pottery collection, a stylistic continuity of Harappan civilization isn’t evident.
The Gulf of Khambhat was formed by a major rift that resulted in a down sliding of the Khambhat region. The area is very tectonically active today, and several faults can be found in the gulf. Periodic earthquakes also occur here. This knowledge has led several archeologists to state that the site is not in a secure enough context to be reliably dated. Because of the tectonic activity and strong currents, these archeologists claim that there is not sufficient stratification to be sure the recovered artifacts can be associated with the site.
Complaints have arisen because NIOT recovered artifacts by dredging the sea floor of the site. This method might allow errant artifacts to be collected along with those that actually correlate with the site. Analyzing stratification is virtually impossible with this method as well.

Marine archaeology in the Gulf of Cambay

The Ruins of Gulf of Khambhat and Dwarka

Maps of the Neolithic and Bronze Age expansion

An image of Mary Magdalen wearing a similar Girdle, possibly hinting at some special role.