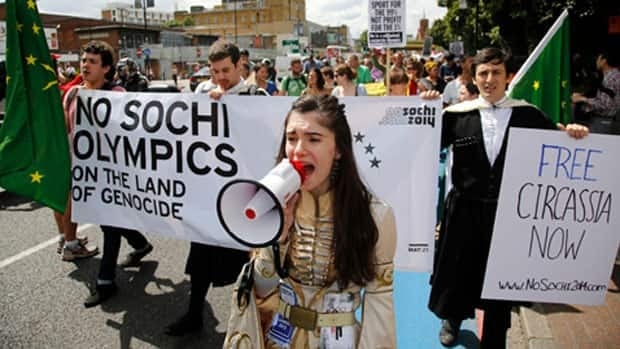 Sochi region, where the 2014 Winter Olympics will be held, was the center that the parliament of independent and free Circassia was gathering until 1864. After the Russian invasion it was not only the Circassians removed from their land but also all their cultural heritage and even their graves were completely destroyed brutally.

In the end of one hundred years of war period, Circassia region of the Caucasus was invaded and colonized by Russian Empire in 1864. During that period of time the inhabitants of the West Caucasus, more than one million five hundred thousand Circassians (Adige, Abkhaz and Wubikh people), were forced to leave their land in famine after all their villages and fields were burned and destroyed. They were exiled from their land to Ottoman Empire under inhumane conditions.

Today in the state museums of Sochi there is nothing displayed related to Circassians, the autochthonous people of that land for thousands of years. The real ancient history of Sochi extends to Anatolian Hattis, famous Troy, Meot and Sind Empires is almost forgotten.

The Russian written history of Sochi begins in 1830 with the victories bombardment of Russian Tsar Navy landing soldiers to the Socha village which was destroyed and renamed by Russians as Navagiski fortified territory.

In the museums of Sochi you can only see the pictures of poor Russian mujicks who were brought from inner Russia then forced to settle to Circassia after the Circassian Exile and also the Cossacks who even appropriating the national clothes of the exiled inhabitants shamelessly.

The Hidden Cost of the Winter Olympics

The Sochi Connection: The Winter Olympics and the Circassians

Sochi Olympics give boost to Circassian identity in Turkey

Languages of the Caucasus